MYDT Rules of the Road

Structure of the Debate 1/2

Your time begins when you start speaking

Structure of the Debate 2/2 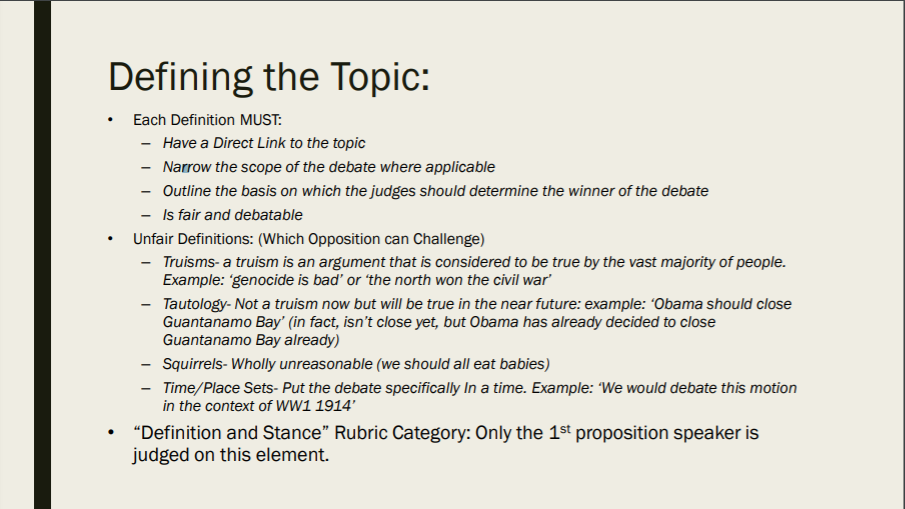 Structure: The speaker’s speech is organized in a clear, logical way and easy to follow. The speaker effectively synthesizes their speech effortless with previous speeches and effectively integrates opponents arguments into their speech.

Logic & Relevance: Demonstrates a thorough grounding in the topic and fully understands the complexities and nuances involved. Delivers arguments back with solid reasoning and thorough evidence. Always answers the question “how does this relate back to the topic”

Delivery: Clear mastery of rhetorical devices like humor, pausing for emphasis, and vocal inflection to add depth and character to speech. Speaks passionately and convincingly.

DO NOT READ OFF AN ARTICLE OR PREPARED SPEECH.

YOU WILL LOSE POINTS HERE EVEN IF YOU WROTE IT.

Definition and Stance: The 1st proposition speaker clearly sets the stage for the debate. Defines the topic, narrowing the scope of the debate where applicable, outlines the basis on which the judges should determine the winner of the debate, provides the team’s overall stance and strategic approach to topic, clearly states what arguments will be made by 1st and 2nd Speakers.

All speakers except Prop 1

The scores mentioned will determine who advances -NOT WINS AND LOSSES

* A maximum of 2 minutes will be allowed in between rounds (interstitial time). If the judge decides to proceed before 2 minutes elapse, then the debate will proceed at the judge’s discretion. The judge will announce when the next speaker may begin after the interstitial time has ended.

* TIMING SUMMARY: (a) speech: up to 5 or 4 minutes (including POIs); (b) interstitial time (between the conclusion of the last speech and the start of the next speech): up to 2 minutes.

* CAVEAT: The judge of each debate is the ultimate arbiter of time.

NOTE: At the end of the hour allotted for each debate, all breakout rooms will automatically close, and everyone will be routed back to the main room.

B. Communication during the debate

* The chat box will be disabled

* You are allowed to communicate ONLY with your team members during the debate to share points using methods other than zoom such as text message, IM, phone call etc.

* Outside communication with a family member, friend, or even coach is prohibited while the debate is in progress

* No help – by means of text, audio etc – is allowed to be given to a debater by anyone while they are speaking.

* No surfing the web during a debate.

* Teams will be given 20 minutes of prep time following the announcement of the debate topic.

* Predetermined prop/opp sides will be announced for each team when the topic is announced. Each team will be assigned one prop and one opp side for the two impromptu debates.

* Impromptu topics (preliminary rounds 2 and 4) will be announced in the main room. Once the topic is announced, debaters must discuss the topic using their alternative devices (e.g. 3-way call) (cf. “Communication”, above). They can turn off audio and video during the 20 minute prep time but they should not leave the Zoom meeting. Debaters will be assigned to their breakout rooms during the 20 minute prep time.

* Teams may consult any source during the prep time, including Internet, coaches, and parents. However, as mentioned previously, under no circumstances should debaters receive instruction from coaches, parents, or anyone else while the debate is in session. During a speech, a speaker cannot receive help from anyone, including a teammate (cf. “Communication,” above).

* Internet use during prep time for impromptu debates is permitted but not recommended, as there isn’t enough time to adequately research and understand key research in the time internet access is allowed. Instead take the time to gather your thoughts, confer with your teammates and ensure you address all relevant points and refutations (cf. “Communication”, above).

* Device audio/video must be verified and cross-checked prior to tournament day. For example, the coaches or parents can check devices or the debaters can check each other’s devices (cf. “Internet Interruption”, below).

* Everyone must stay in the Zoom meeting for the whole day. If someone leaves the meeting by mistake, they can rejoin by using the Zoom link and will be directed to where they want to go (cf. “Impromptu Debates”, above).

* Name designation must be strictly observed (cf. “Zoom/Virtual Rules”, above).

* No changes in team name or composition on tournament day.

* Each debater must login using a unique address that is not shared by others.

* Judges will decide prop/opp sides in the breakout rooms (except for the impromptu debates, cf. “Impromptu Debates”, above).

* In the event that a speaker’s speech drops or becomes incomprehensible because e.g., the speaker’s device malfunctions or because of Wi-Fi/internet connection issues, the speaker should immediately call into the MYDT 2020 Zoom meeting and will be directed back to their debate to complete their speech. Call-in information will be made available in advance.

* In the event the speaker is unable to call into the Zoom meeting, or if it takes too long, they may take other measures such as calling a teammate who may put them on speakerphone to complete their speech and respond to POIs (if applicable).

* Please note that a teammate may not speak on behalf of the dropped speaker.

* The speaker will not get an extension in speaking time in case of interruption. E.g., if the Prop 1 speaker’s internet drops at minute 2 of their 5 minute speech, and it takes another minute to call in, they will only get another 2 minutes to complete their speech.

* To avoid such issues to the greatest extent possible, each debater should cross check their device audio/video prior to tournament day and minimize parallel internet usage within the home (cf. “Logistics”, above).