* Each team consists of 3 members. Each member has a role to play.

* Proposition defines the topic and unless not debatable, the opposition should accept the definition.

* Each speaker has a role and must be judged based on the fulfillment of that role. Thus, the rubric will have a section that reflects this.

* 1st speaker defines the topic, which includes defining the key terms and the stance of the proposition, introduces the argument and lays down the structure of the argument. He/She may also argue one aspect/point of the topic.

* 2nd speakers on both sides will have to first offer rebuttals to the speakers before them and then lay down any arguments of their own. They should also reiterate their 1st speaker’s points to strengthen the structure of the argument of their team. There will be the bulk of the argument or case.

* There must be a clear structure to the team’s argument and the division between the two speakers for their points must be clear.

* Accepting and answering an opponent’s interjections is strongly recommended. This demonstrates the strength of one’s case and self-confidence. However, one is advised against taking too many questions; this drives the speaker off track. The judges should be able to see that the speaker has the command of the floor.

Each school may enter up to four teams.

All teams are involved in the preliminary rounds. There will be 3 preliminary rounds. The teams will be paired at random for the first round. However, in the second and the third round, the teams will be paired according to their scores to make the debates more balanced and allow for improvement within compatible teams. This will help increase the quality of the debates and help individual teams to improve their performance. The top four teams for each the middle and high school debates will be selected as semi-finalists according to the cumulative scores achieved in the three preliminary rounds. They will not be selected according to how many wins or losses they had. The two Semifinals for each group will also be held simultaneously in two classrooms/break-out rooms based on the preliminary round ranking (see event diagram below).
The topics for the first and second preliminary round will be given out before but the third preliminary round will be impromptu. The topic will be given in the main hall and the debaters will be required to begin as soon as they have made it into the assigned rooms. This will allow them about 5 minutes to establish their stance, work on the structure of their argument and line of reasoning. We believe that the debaters can actually do this and will manage just fine. This will be an extra exercise for them in their mind and will help in the skill building that this debate tournament is all about.

All MS and HS debates are separate events and they will be held in separate rooms simultaneously, except the Finals. The MS and the HS finals will go on back-to-back.

Finals will be held in the main hall.

Virtual tournaments retain an identical format except the tournament is now conducted virtually on Zoom.  Teams will debate with their webcams on, in front of the judges and audience.

Four Preliminary Rounds:  All teams participate in the preliminary rounds.

Semi-Finals: Advancing to the semi-finals round will be based on the Overall Team Debate Score*, not team wins and losses.

Final:  Winners of semi-finals face each other.

The preliminary round pairings were created through an entirely random process. Each team was arbitrarily assigned a number. Lists of random numbers from 1 to the number of teams in that age group regenerated. The lists word examined pairwise to determine the pairings. When the age group had an odd number of teams, the final unpaired number would be the team assigned a bye for that round. A team can only have one by in the preliminary rounds.

An example should clarify this process. Let’s assume there are 7 teams. We number the teams 1 through 7:

We generate 30 sequences of the digits from 1 to 7 in random order using a random number generator. We evaluate them in the order they were generated. As an illustration, I have shown the first 8 sequences.

From the first line we have ROUND 1

3 bye or papaya has a bye

From the second line we have ROUND 2

5 bye or blueberry has a bye

Line four has 1 v 6 (mango v kumquat) which is a duplicate of a matchup round 2 so we skip the entire line.

From line five we have ROUND 3

1 bye or mango has a bye

The remaining lines are not used but were generated in case they were needed.

We will compare tied teams or debaters using the following sub-scores:

* Subtotal of the Logic & Relevance plus Refutation & Clash 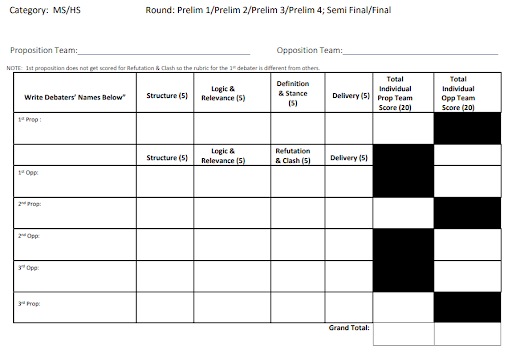 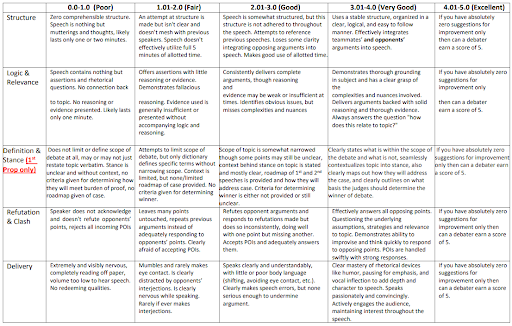